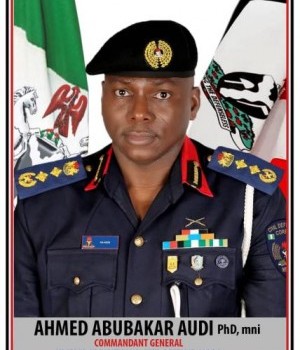 Dr. Ahmed Abubakar Audi, mni was born in the family of Suleiman Audi, an Islamic Clergy in Laminga Town of Nasarawa Local Government Area of Nasarawa State on 30th September 1967. He started his education at Kofar Kudu Primary School, located in Nasarawa town where he obtained the First School Leaving Certificate in 1981. Thereafter, he attended Government Teachers’ College, Jengre, in Plateau, where he obtained a Teachers’ Grade II Certificate in 1987.

He further attended the College of Education, Akwanga, where he obtained the Nigeria Certificate in Education (NCE) in 1992. Dr. Audi attended the famous Ahmadu Bello University, Zaria, In 1995 where he bagged a B.Sc degree in Physical and Health Education. He then proceeded for the NYSC program and passed out in 1996. Thereafter, he obtained a Master’s Degree in Public Administration from the University of Calabar in 2001.

Dr. Audi’s strong desire for excellence while in public service informed his courage to further acquire a Doctorate Degree (Ph.D.) in Public Administration with specialization in Public Policy Analysis from Nasarawa State University, Keffi in 2014. Interestingly, Dr. Audi has a Bachelor of Science Degree (B.Sc) in the same field. This was for the purposes of specialization and harmonization of academic and professional records.

His quest for advanced professional knowledge informed his decision to sacrifice resources leading to the award of Masters in Law Enforcement and Criminal Justice (MLCJ) from ABU Zaria, in 2019. Dr. Audi’s meritorious service has brought him to the present status span from 1996 to date. He joined the service of Nigeria Security and Civil Defence Corps in November 1996 as a volunteer and was deployed to serve as a Divisional Officer in Obi Local Government Area after his basic officer’s training in 1997.

He also served as the Divisional Officer in Lafia Division from 1998 to 2000. In July 2000, he was redeployed to Nasarawa State Command Headquarters and served as Acting Head of Operations. In May 2001, he became the Head of Intelligence Department in Nasarawa State command. Dr. Audi was appointed Head of Admin and Command 2i/c in 2002. In 2006, he was deployed to Yobe State Command as a Deputy Commandant and 2i/c where he served till 2007.

Subsequently, he was promoted to the rank of Assistant Commandant General (ACG) and redeployed to the National Headquarters as Director of Procurement where he served till 2016. After his training as a ‘Tink-Tank’ Policy Strategist in the National Institute of Policy and Strategic Studies (NIPSS), Kuru, Jos, he was posted to NSCDC Training College in Katsina as the College Provost from December 2016 to October 2018.

Until his appointment as the Commandant General, Dr. Audi had served as Zonal Commander, NSCDC Zone ‘C’ Headquarters, Bauchi, in charge of North-East States. Dr. Audi is a member and Fellow of prestigious professional bodies notable amongst them are: Member, National Institute (mni), having attended Senior Executive Course 38 in NIPSS, Kuru, Jos, 2016; Fellow, Institute of Security and Forensic Studies, Nigeria.

Apart from the numerous academic and professional courses attended by Dr. Audi, he also attended local and international training which include:

Global Anti-fraud Seminar on Corruption within the Public and Private Sector, National and International (University of Teesside, England, United Kingdom, 2008)

Performance and Accountability Course in Dubai (2008)

Modern Tactics and Techniques in Disaster Management Course in Russia (2012)

Indeed, Dr. Audi’s doggedness, dedication, and commitment to service have earned him several Professional merit Awards. Notable amongst them is a Distinguish Merit Award for Excellence in Administration and Security Operations by the Institute of Industrialist and corporate Administration of Nigeria.

He is a credible and reliable administrator, who is capable of taking on the management of our dear Corps to a higher height. This security and strategic thinker of ours is happily married and blessed with children.